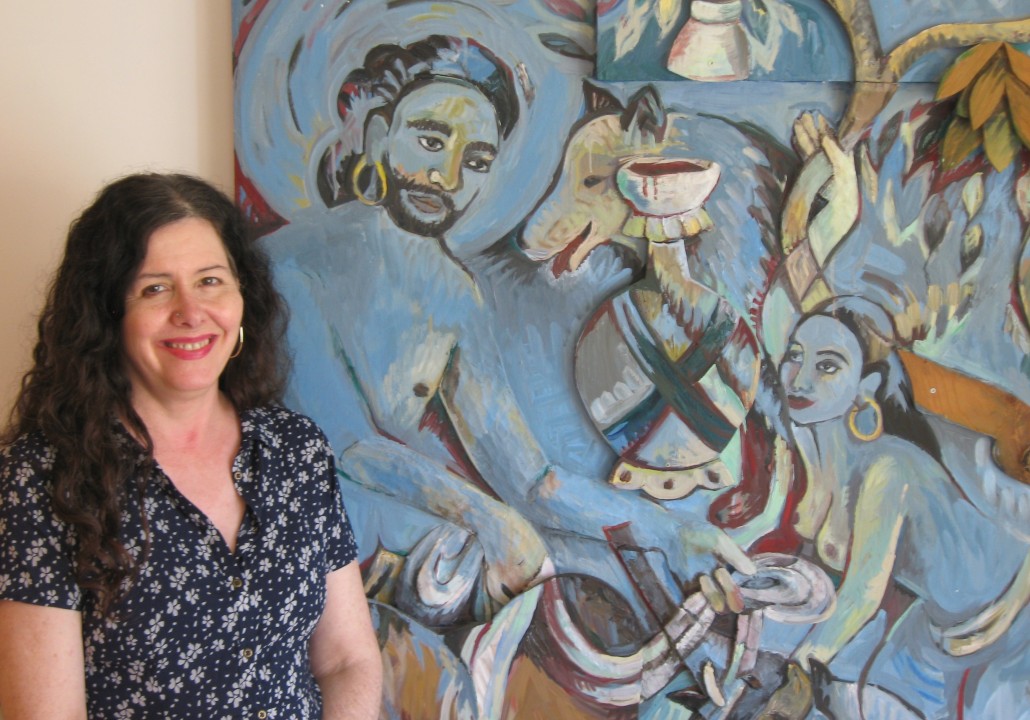 Barbara’s artwork is grounded in Western art practices, both contemporary and historical …

And over the years Buddhist themes and iconography have become more and more emphasized and integrated into her art.

My connection to art began as a child growing up in Colorado, I always loved to draw and paint. After high school I moved to New York City to attend Parson’s School of Design, where I received a BFA in 1981. I began to search for a spiritual path in New York and tried various meditation teachers and techniques.

In 1982 I returned to Colorado and moved to Boulder to get an MFA from the University of Colorado. It was in Boulder that I began meditating and taking Buddhist studies and Abhidharma classes at Naropa University. A natural sense of devotion and clarity arose, knowing I had found the path I was searching for. I met Chogyam Trungpa Rinpoche in 1983 at a month long meditation program. I subsequently took my refuge and bodhisattva vows from Trungpa Rinpoche and attended a three month long Vajrayana Seminary in the summer of 1985.

After seminary my husband and I moved to Boston where I continued making and showing my art as well as being involved with the sangha there. In 1989 we moved to Halifax Nova Scotia with our first child, Oliver, to be close to the Buddhist community founded by Chogyam Trungpa. I have continued to make and exhibit my art both in Canada and in the United States. In 1992 I gave birth to my second child, Alistair. From 2004-2013 I taught drawing, painting and printmaking at the Nova Scotia College of Art and Design. I received a Creation Grant from Nova Scotia Department of Tourism, Culture and Heritage in 2009. Most recently, in 2015, I had a solo exhibition entitled “As in a Dream” at Hermes Gallery in Halifax. In 2017 I completed a cycle of paintings on the Five Buddha Families.

In 2018 I became a student of Tsultrim Allione and joined the Magyu Lineage (Mother Lineage) through Tara Madala. My primary connection and practices for the past 20 years have been Vajryogini and Chöd.

My artwork is grounded in Western art practices, both contemporary and historical, but over the years Buddhist themes and iconography have become more and more emphasized and integrated into my art. My paintings are wooden constructions that combine imagery from nature; animals, plants, the human figure and human anatomy; with imagery from Tibetan Buddhist murals and thangka paintings. These paintings hang on the wall yet have a three dimensional aspect with cut and carved forms moving off the surface of the painting. The works are assembled in pieces, like a child’s jigsaw puzzle, yet when put together create a dynamic whole with references both to the history of representational and illusionistic painting and to the physical presence of object and form in sculpture. I have also explored drawing and wood carving within my art practice. I am particularly interested in the dakini and the theme of charnel ground in my artwork.

Ultimately, my paintings are an attempt to reconcile and connect the physical world with the spiritual world. I am interested in both ordinary visual perception juxtaposed to interior visual perception and how the two overlap and mingle.  There is the pure physical act of sight and the visionary quality of going beyond the sense perceptions into the realm of the imagination and visualization.