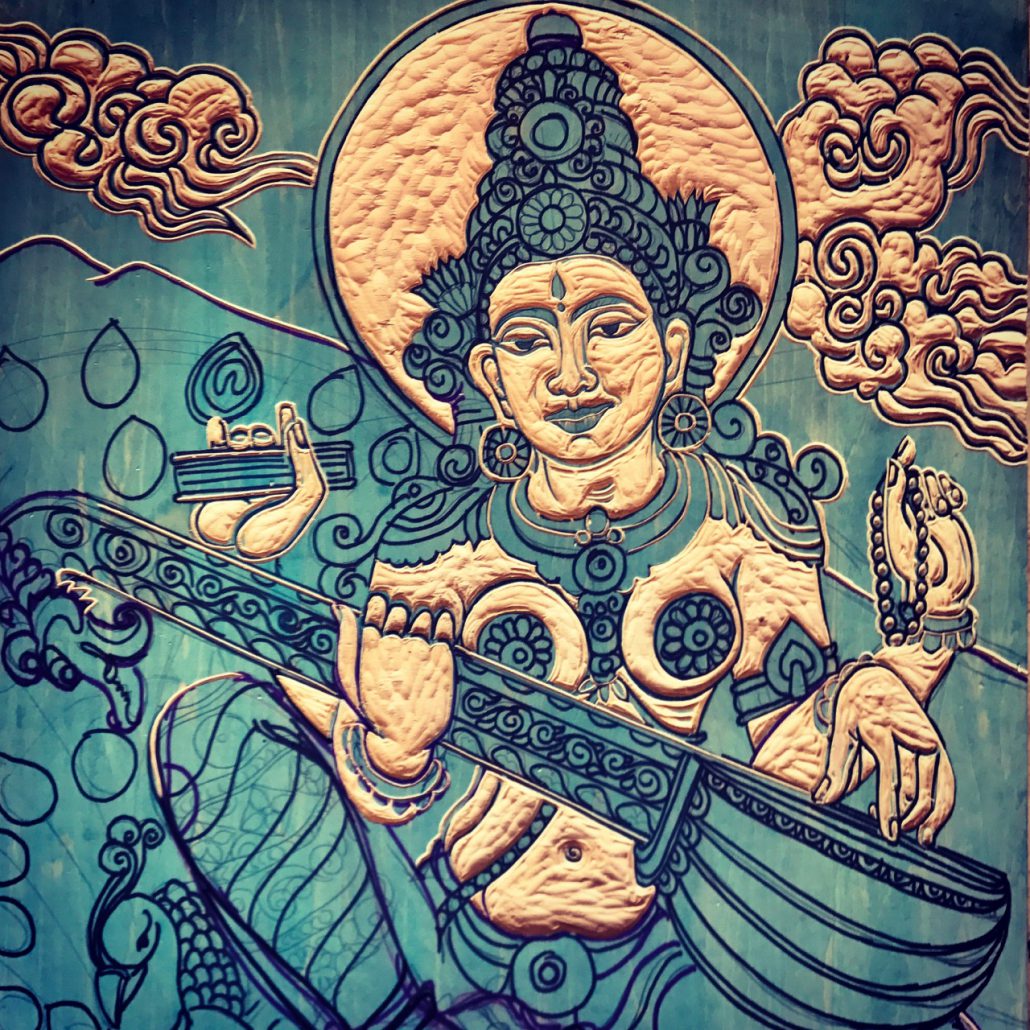 Mokuhanga translates as Moku which means wood and Hanga is to print. It is the Japanese method of woodblock printing especially present in the Edo period (1603-1867). Traditionally a different woodblock is carved for each color printed.

Mokuhanga differs from Western printing in that the inks used are black Sumie and watercolor paints. Another important distinction is the prints are hand rubbed with a baren not put through a printing press. The entire process is affected by water; the carved board should be dampened to just the right moisture content, the paper (Japanese Washi also called Kozo or mulberry paper) is also dampened and kept in a damp pack – too wet and the colors will be muddy and gloppy, too dry and the color will not properly transfer. It takes care, sensitivity and experience to balance the woodblock, mulberry paper and water based inks to be the optimal wetness for transfer and printing.

There are two main styles of Mokuhanga. The Kyoto style is more opaque and Tokyo style is more translucent. Historically there were specialists for each stage of the printmaking: the artist drew and painted the image with sumie inks and brushes. Next, a specific artisan carved the artwork. It could even be a team of carvers and the same with printing. It could be that one person would do skies, another would do different landscape areas and a master might do details and faces. In contemporary times the artist performs these duties in a process called: Sosaku-hanga where the artist controls all stages of printmaking: carving the woodblock, choosing the papers and colors, controlling the registration or alignment of the papers and hand rubbing the print. I print Sosaku-hanga. I draw my artworks, carve the blocks, select the paper and hand rub each print.

Mokuhanga came to the West as packing paper in shipments to Europe around 1856 and later. Mokuhanga was not prized as an art form in old Japan but was considered a method for quantity printmaking as we might consider Xerox prints for mass distribution. The French impressionists became enamored of the Japanese woodblocks and helped elevate woodblocks to fine art. This led to a style known as Japonisme, and heavily influenced the work of Matisse, Monet, Van Goh, Toulouse Lautrec, Picasso, Gaugin and others who used mokuhanga influences in both painting and the production of woodblocks.

The art and technique of mokuhanga was dying out in Japan until recently where there has been a revival of the old techniques. Hiroki Morinoue has been a primary figure in preserving this traditional art form and helping to grow it in the West. He has been my teacher and mentor since 2014. He is recognized as a living treasure in both Hawaii and Japan for his contributions to preserving this traditional art form. Mokuhanga has many attractive features to Western and contemporary artists. It is low tech, not requiring an expensive printing press, it is easily accessible and can be printed at the dining room table. It is non- toxic using water based inks and is environmentally friendly. Mokuhanga is easily transported and can be practiced most anywhere. The subtle colors and delicacy of hand printing with the variables of water make it a challenging and yet highly satisfying for contemporary printmaking artists. 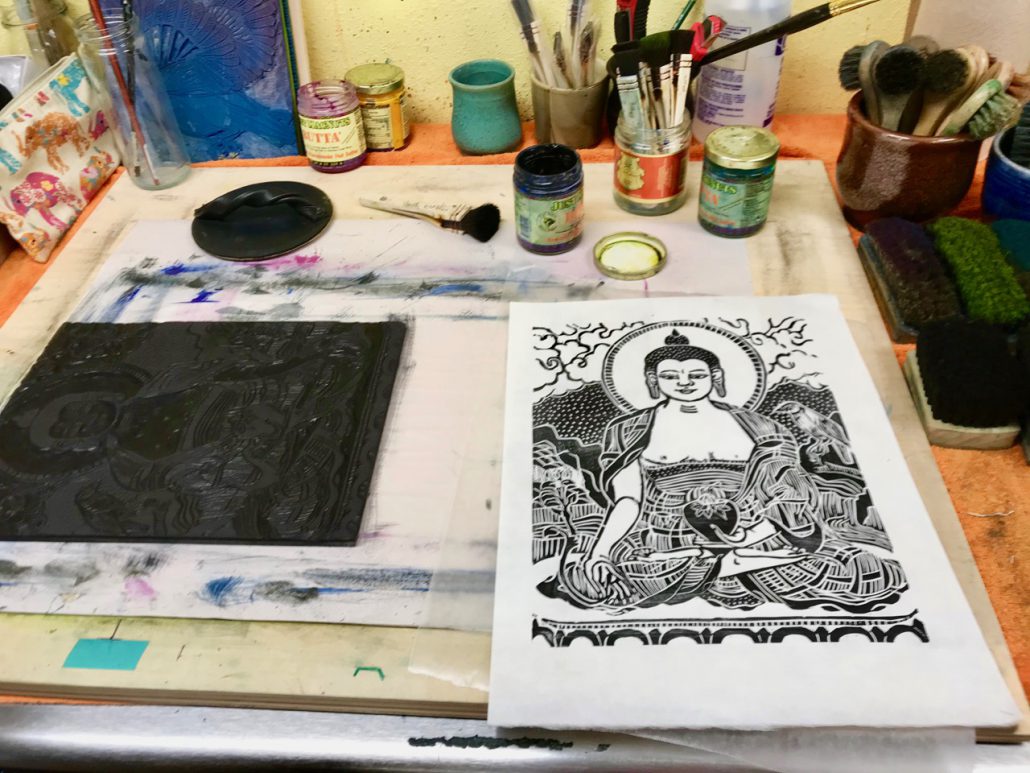 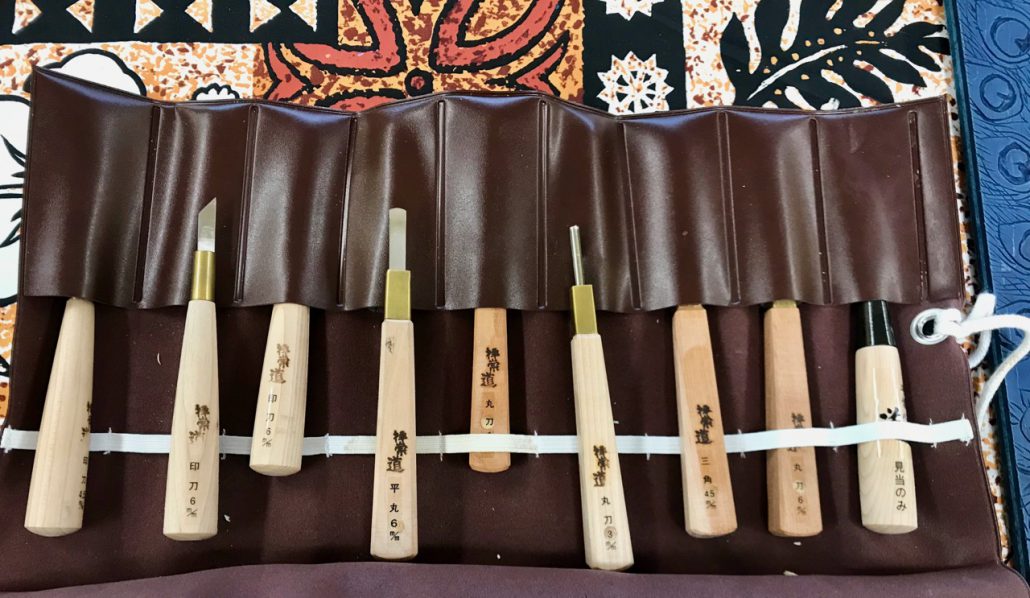 The printing area with baren, brushes and inks (above) and Japanese carving tools 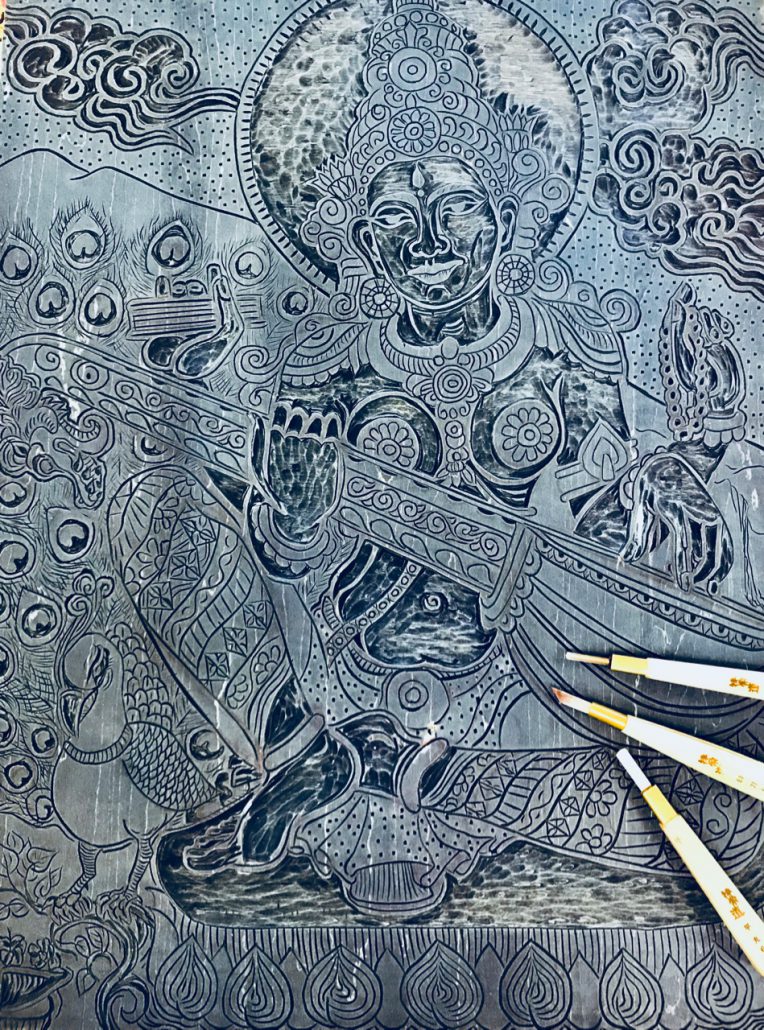 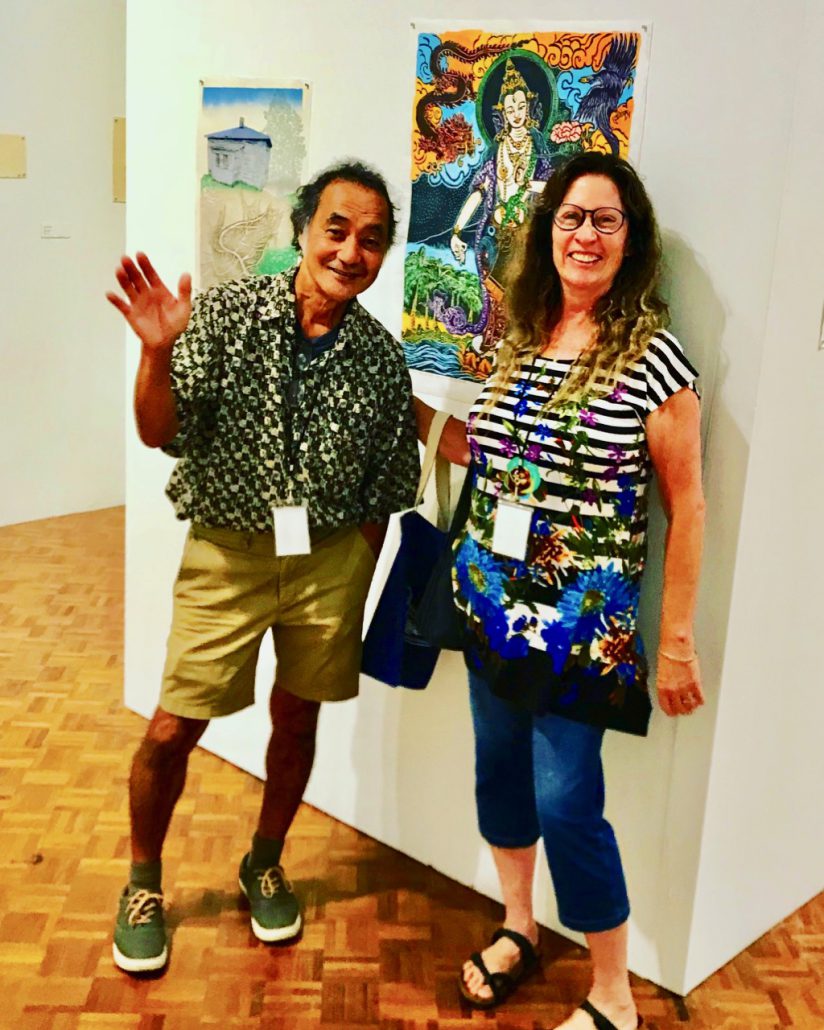 Hiroki Morinoue and Faith at the International juried Mokuhanga show in Honolulu, Hawaii, 2017. Faith’s Standing Tara was featured in the show.