Living in Tibet for 5 years – let alone creating the huge thangkas for HH Karmapa at Tsurphu – was beyond any wishful fantasy.

It was a remarkable time to see HH Karmapa enthroned in Tibet and being connected through this miraculous task to this age old tradition.

Below is a tentative account to describe some of the conditions and events that made it all come true.

I studied thangka painting with Terris Temple. When we met in 1990 it was uncanny, but we instantly recognized each other. We also shared an astonishing intuition that we had something to accomplish which guided us on the marvelous journey of thangka study and adventure together.

Terris had studied thangka painting in Nepal in 1966 with the state artist of Tibet, and had been a student of HH the 16th Karmapa.

In 1992, we painted a large image of  Buddha Sakyamuni – in the Theravada tradition – to offer to the King of Thailand in gratitude of our stay there.

Shortly after, we heard Tibet was open and it was on our way there that the Tsurphu Foundation (an organization involved in restoring the monastery) asked us to re-create the huge thangka (Tib. ‘gos.sKu’, pronounced ‘Ki-gu’) for Tsurphu Monestery.

The progression of events once we arrived in Lhasa were very fortuitous. Like being swept in a huge auspicious wave.

On the day of the enthronement of HH Karmapa at Tsurphu Monastery (Sept. 1992), we met Ven. Drupon Dechen Rinpoche – abbot of Tsurphu Monestery and the one responsible for rebuilding the monastery. He asked us to make the 23m x 35m thangka after promptly performing a Mo divination and stating that we were the ones to do this project. Without knowing much about appliqués – let alone huge scale appliqués – we accepted and set out on our research.

We were responsible for many aspects of the work from designing, drawing, locating and overseeing the team, sourcing materials and most importantly to begin with – fund raising. We thought that creating and offering a small scale replica to whoever donated the initial funds may propel this effort and this indeed was a good idea – a patron appeared within 3 days.

We found our team of Tibetan sewers at the White Conch factory in Lhasa (previously known as Garment Factory #2) which comprised of about 60 workers – mostly women. The wonderful master sewer coordinating the small team of 6 women – the late Tenpa Rabgay – was himself the son of an appliqué master who had created the large thangka for the Potala.

This factory produced traditional festival tents and temple hangings. It was the first time they had the opportunity to work on a large scale sacred image. Where they were apprehensive about design, they were hugely competent with large scale; and where we were overwhelmed by the size, we felt confident in designing and drawing the thangka…. This opportune collaboration combined all the skills required and the auspicious alliance to create the sacred images began.

The first Tsurphu thangka was created between 1992 and 1994. It is unfurled annually at Tsurphu over an existing stone wall at the event of Saga Dawa. It

replaces the previous thangka created in 1590, which years ago which was destroyed during the Cultural Revolution.

Though we were inspired to work unrelentingly – without the blessings of HH Karmapa and support of Drupon Dechen Rinpoche – this huge project could not have unfolded obstacle free as it did.

The afternoon of the first showing, we were requested to create the second thangka – the wrathful image of protectors Bernakchen and Palden Lhamo in Yab Yum. This Mahakala thangka project happened between 1994 -1997.

Even now – over 20 years on – it is hard to fully appreciate having been part of this marvelous phenomenon and the magnitude of the blessing.

It still feels like a dream beyond wildest dreams and naturally has had a profound impact on many levels.

So much personal learning occurred working within our special team – witnessing the Tibetans unwavering joyful resilience – not just in their sewing – was deeply humbling.  It was also a precious time to welcome our son Sonam into that world in between the creation of these thangkas.

In terms of artistic development – all of my work has evolved from these projects.

Whilst in Tibet, we came across the Amdo style of appliqué thangkas (cut, glued and painted). This technique fast became a fascination – delighting in the fusion of silks, brocades and painting – as well as truthfully never being personally adept at sewing.

This particular silk appliqué technique has been the instrument I have played with – pushing  boundaries and fine tuning – to express inspirations ranging from portraits (with first portraits of HH Karmapa), environmental (protecting Himalayan wildlife and habitat), seascapes (of the stunning Hawaiian coastlines) to 3D abstract constructions (inspired by the lush palette of silks of Thailand).

I have been very lucky to pursue the practice of creating thangkas, which is the essence of all my other creations.

Presently, Terris and I are in the process of finishing drawings for the last Tsurphu appliqué (Tsechur Drabje – 2m x 40m).

This work has evolved intermittently – mostly in the UK -and will be sewn as a silk appliqué in Dharamsala.

It will mark the final piece out of the set of 4 appliqués which existed at Tsurphu monastery.

About The Artist:  Leslie Nguyen Temple 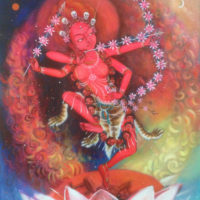 50% OFF ART PRINTS - IMAGES OF ENLIGHTENMENT⁠⠀

50% OFF TODAY ONLY SPECIAL ON TILLY'S ART PRINTS C

VAJRAKILAYA⁠⠀ ⁠⠀ The most dynamic obstacle