Lady of Nanam, Achi Chokyi Drolma is venerated as both an emanation of the female Buddha Vajrayogini and as the great-grandmother of the founder of the Drigung Kagyu sect, Ratnashri Jigten Sumgon. From a ritual standpoint, she functions not only as a semi-wrathful Dharma protectress but in meditation practices as a guru, a potential consort, and even as a tutelary deity, or yidam.

Chokyi Drolma, literally means “Saviouress of the Dharma,” and the familiar title Achi, which simply translates as “grandmother”. In this thangka we can see Achi as the central figure alongside Tashi Tseringma and the Long-Life sisters. On top, there is a line of eight appropriate lineage holders. From left to right, Vajradhara, the Indian Mahasiddha Tilopa, his direct disciple Naropa, Marpa, Milarepa, Gampopa, Pakmodrupa and Jigten Sumgon. Below this line on the right is an image of Chakrasamvara with his consort Vajravarahi, and on the left is a four-armed form of the deity Mahakala. There is also a second, smaller image of Achi standing on the left side. The lowest line of figures are animals given to Achi and her retinue as offerings. 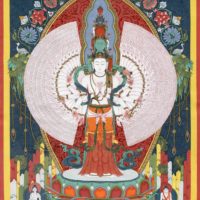 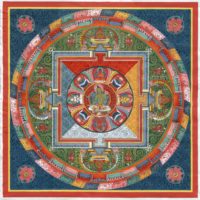