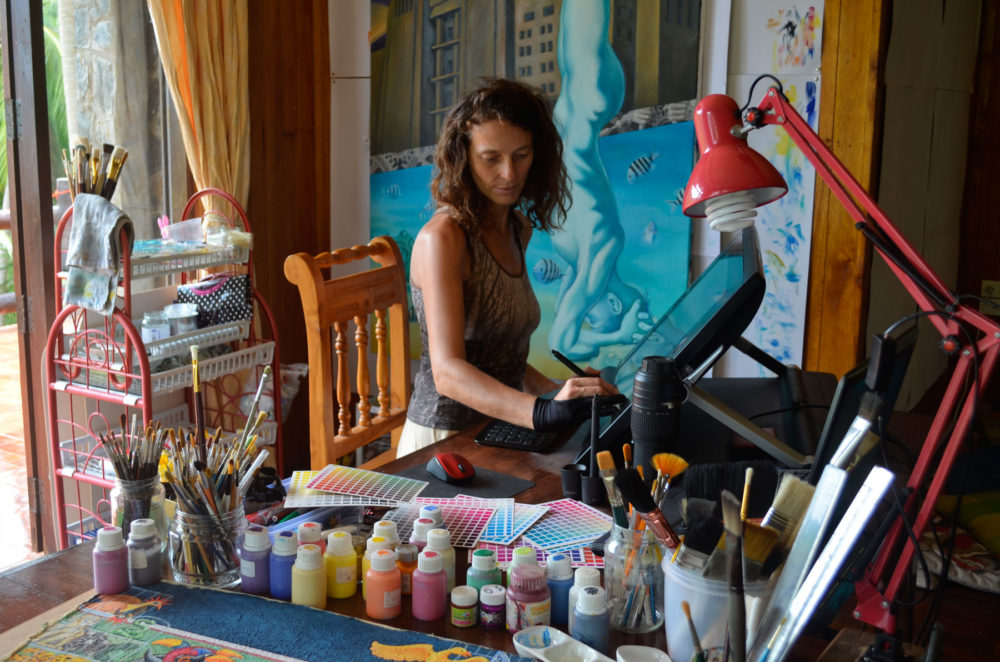 Paola Minelli (Karma Tseten Chödrön) was born in Italy in 1963. Her formal art studies began at the Liceo Artistico (Art College) and then at the Accademia di Belle Arti (Fine Arts Academy) in Turin, where she graduated in 1991 with a thesis on the anatomy of the Tantric Buddhism divinities and a final exam on designing a Green Tara thangka.


Paola worked in restoration and in mural painting work sites and has created thousands of illustrations both for children’s books and of ecological inspiration.
Since 1988 she has found refuge in Buddha, Dharma, and Sangha and from 1991 has studied and practiced under the guidance of Chögyal Namkhai Norbu Rinpoche. She followed the teachings of various Buddhist, Bonpo and Hindu masters, including, among the most notable, Drugu Choegyal Rinpoche, Lopon Tenzin Namdak, the Dalai Lama, and Dr. Acharya Ashutos. She is also a regular Hatha Yoga practitioner and teacher.
Right from her very first experiences of Tantric practice visualizations, Paola found wonderful inspiration in them for her paintings. Paola had discovered Thangka art in an exhibition held in Turin in the 80s, in which she admired paintings of exquisite quality. Later her eyes and spirit were nourished by an extraordinary range of styles and valuable artwork she discovered at the Guimet museum in Paris in the 90s, and this resulted in a new wave of inspiration. In those paintings and sculptures she discovered a new kind of balance, made of peace, harmony and beauty. These shared nothing of the repetitive quality of imitation with the cheap, common and commercial thangkas, but on the contrary were full of artistry, soul and inspiration.
In the 90s, having completed her studies at the Fine Arts Academy, and after a period making a living with portraits, wall paintings and anything that came her way, she participated in the painting of the Gompa for the Dzogchen Community in Merigar, Italy. On that occasion she met for the first time some Tibetan painters, among whom Drugu Choegyal Rinpoche.
In 1995-96 she went to Kathmandu, Nepal where she studied under Gega Lama, an important artist of the Karma Gadri school, and then continued her studies in India, in Kalimpong with Lama Shedrub.
Since 1997 Paola has been teaching the basis of Thangka painting in Rome and Arcidosso, both privately and in courses run by the Shang Shung Institute. She has also produced illustrations for numerous books related to Dharma published by Ubaldini Editore, Snow Lion Press, Shang Shung Edizioni, Psyche Edizioni and The Mirror.
After acquiring and practicing the traditional techniques of Tibetan painting employing natural pigments on canvas, she also worked, according to circumstances, with synthetic paints, gouache, acrylic, ink and mixed media. The most hybrid of examples of her work is a color illustration for a book of Mandarava, made with aniline, acrylic and colored pencil on paper, later digitally reworked to adapt it to commercial printing. 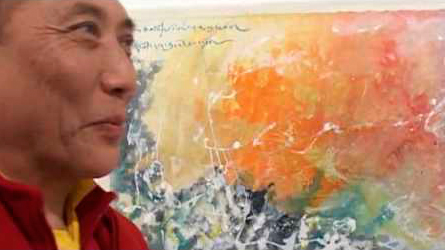 Among her art masters, Drugu Choegyal Rinpoche is the one who most inspired her, as, reaching straight to the heart of her perplexities, he was able to give her that precious guidance that later freed her to create a style faithful to the iconographic and iconometric traditions but close to her own cultural background as well.


Rinpoche encouraged her to treasure her European cultural heritage and blend it with what she had learned from observing  Buddhist artworks from various epochs and the craft of Tibetan painters. This was in stark contrast with the more formal and uncompromising attitude called for by most other Thangka painters whom she felt were custodians of regimented artistic traditions far from those of her milieu. When painting images of the Dharma Paola is inspired at times somewhat less by Tibetan art, whose changing canons over the centuries often express themselves presently in a sort of repetitive mannerism far from Western aesthetic sensibilities, than by artists like Beato Angelico, Botticelli and other great Italian painters.
Certainly the Buddhas cannot be represented by a creation left to one’s fancy. Thus within the boundaries of canonical prescriptions Paola has discovered infinite variations, and this has led her to search for an effective rather than exotic form of art, just like we wish for every expression of the Dharma to be, where the point of equilibrium reveals itself when it becomes applicable and comprehensible when and where it is applied, yet without distorting its deeper meaning.
One important element is the connection between the feeling expressed by the painting and the meaning of the teaching depicted.
The result has been a simplification, a sober style resulting precisely from that search for the essential, for rigorous drawing and chromatic harmony, for equanimity and intrinsic expressive value: it is not the artist expressing her individuality, but rather becoming a channel through which the invisible can reveal itself, take shape and be understood.
According to Paola there must be a coherence, a connection between the creation, how it is created, the use one makes of the sacred image and the meditative or devotional practice. The reason behind the artistic activity and the aesthetic choices are profoundly connected with the Dharma. The work of art is painted while reciting mantra, practicing awareness and contemplation. It is conceived as an object capable of inspiring and helping practitioners in need of a visual support. The artist, with her intuitive abilities, can collaborate by offering that help to practitioners.
Striving to reveal the most beauty, balance, grace, strength, compassion, love, and wisdom possible and all the Siddhis within the iconometric canons of perfection is seeking formal purity and distilling it within the canon itself. While painting the Enlightened, one’s attention shifts to the intrinsic significance of enlightenment, the symbol directly conveys the meaning beyond words. The images of the Buddha possess the ability to fill the mind with joy as well as inspiration about the import of the practice while contemplating them, thus when painting them as well.

Paola believes in the evocative power of symbolic language, but also in the actual process of “creation” as a good practice of mindfulness and relaxation, without which painting will not succeed. Painting is a meditative training, an exercise in patience, integration, a gift to oneself, to others and to the world.


The first image Paola painted was a form of Mandarava, linked to a specific Mind Terma of Chögyal Namkhai Norbu Rinpoche. Back then there were no images referred to that Tantra, and she was asked to draw one. However, in those days her knowledge was merely theoretical, and the result was an unripe china ink line drawing on a parchment. The image is in the book used by the international Dzogchen community to this day despite its obvious imperfections and her having created it intuitively long before her subsequent deep and dedicated studies.
The Dharma permeates Paola’s entire life and the very meaning of her existence. Art is part of this, but not the most important, since she sees it not as an end in itself but as a tool, a bit like a spoon to nourish one’s inner self with, or the finger that points at the moon.
Scroll to top