Amitayus, the Buddha of Eternal Life is an emanation of Amitabha. Amitabha is the form body and Amitayus, is the apparitional body. The ultimate truth body is without appearance and does not appear in painting or sculptural art.

Amitayus, is seated on a double lotus set on raised throne; he is crowned and wears the ornaments of the bodhisattva. He sits in a meditation posture with a vase in his hands, which contains the elixir of immortality and leaves of the Ashoka tree. It symbolizes “a long life without the misery of disease”.   His body is shining like a jewel as the Buddha who seeks to remove ignorance and allow people to reach true human potential.  The achievement of pure happiness is the principle role of Amitayus Buddha.

Above Amitayus’s head a crouching Garuda devours two snakes as he sits against a blossoming fruit tree. Amitayus is flanked by eight bodhisattvas who are associated with the fulfillment of earthly boons and often form a mandala around a central deity. Seated just below the center of Amitayus’s throne is Shadakshari Lokeshvara; at either side of the peacocks is a protector: to the left, a ferocious red deity, to the right, Achala. 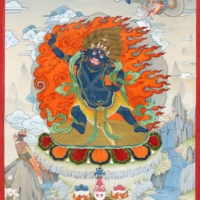