The Union of the Two (Art Print) – Ben Christian

The Union of the Two – Lama Tsongkapa as a Mahasiddha

Lama Tsongkapa here depicted as a Mahasiddha, represents the path itself; and is seen here midway through attaining the form of an Enlightened Being. He offers the mudra of teaching, since it is through his teaching that the path to total enlightenment is illuminated.

This work is inspired by one of several visions Lama Tsongkapa’s own main disciples, Khedrup Je, had of him. 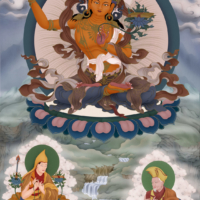 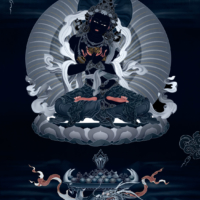