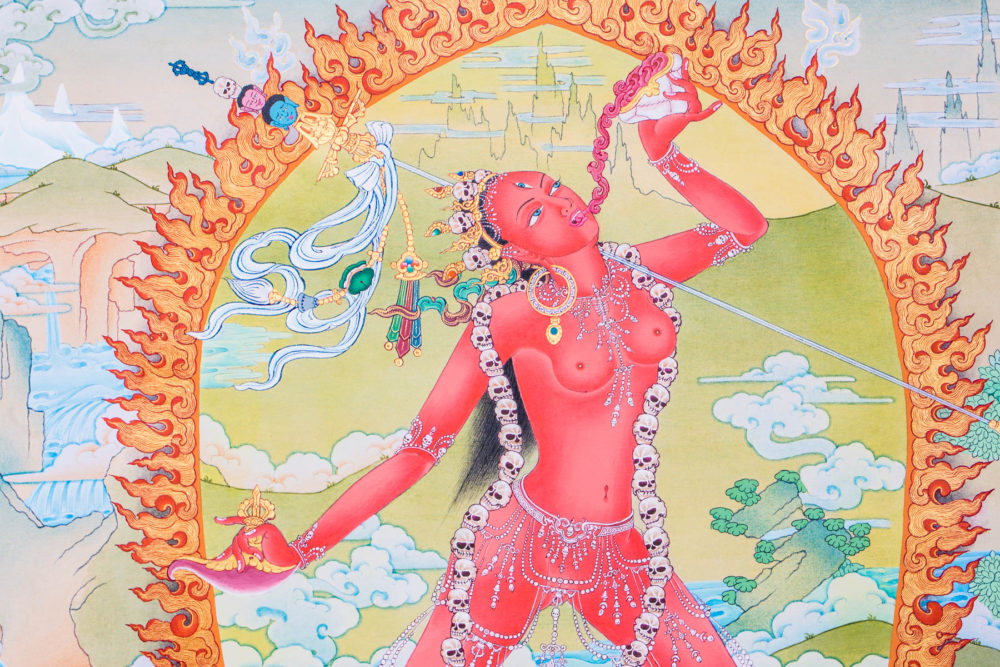 The Meaning of “Dakini” in Tibetan Buddhism

‘The term (Sanskrit) is generally interpreted as “she who flies through the sky.” Related forms of the word appear as ‘dagini’ (Prakrit) and ‘sakini’ (‘she who is powerful’). In any case it is difficult to derive the Vajrayana Buddhist understanding of the term unless one turns to Tibetan.

Because it is the feminine form that most often appears, the feminine translation of the word is customary, ‘khandroma,’ which is most literally translated as ‘she who goes through the sky.’ This is a shortened form of the full Tibetan term ‘khekham su khyappar droma,’ which is literally translated as ‘she who flies everywhere in the [limitless limits of] the realm of space.’ Perhaps this can best be rendered as ‘sky-dancer,’ as the dakini is often iconographically depicted as dancing, which suggests constant movement in space. From her earliest appearances in Indian pantheons, her powers of flight were important, although she is not always seen flying in her Tibetan depictions. For this reason we must examine the meaning of ‘sky’ and ‘dancer’ beyond the merely literal level.

According to Tibetan commentaries, the first part of her name, ‘kha,’ refers to space or sky, the boundless expanse of emptiness (sunyata [sanskrit], tong-pa-nyi [tibetan]) which is the ground of all experience in the Vajrayana Buddhist context. According to the teachings of the sutra tradition, emptiness is described as beyond concept, but the skillful means of this philosophic tradition limits its express to words and concepts. In the Vajrayana, understanding of emptiness is evoked through iconography, symbol, and liturgy. In this context, the dakini awakens the experience of groundlessness and lack of reference point through her soaring in space or the sky (kha). She abides nowehre but arises continually in the practitioiner’s experience as an emblem of space.

The second part of her name, ‘dro,’ indicates movement and life itself. Emptiness is not mere blankness but a mode of being, in which manifestation arises freely, never compromising the power or emptiness. In fact, manifestation in the case of the dakini aids the practitioner, for she points out the dynamic of emptiness in phenomena through her very beings (dro). The quality of movement is one of her most consistent traits, and it refers not only to the movement of her physical form but also to her ability to change form and to appear and disappear at will. The emblematic expression of movement is found in iconographic depictions of her dancing, stepping forward, or flying. These movements relate on an exoteric level to the dakini’s role as a helper or leader on the path: esoterically, they point not to herself but to the medium, the limitless space, in which she moves. She represents the inner experience of space, which is the inspirational impulse at the heart of enlightenment. ‘Ma,’ the feminine ending suggests that it is ‘she’ who dances in the limitlessness of the sky, for as a feminine form she has a unique ability to point out emptiness directly.”